A: Audio CDs use an audio file format that is designed specifically for CD players.

Therefore, the audio file format used for CD audio tracks does not correlate directly to an computer audio file type. However, there are two audio file formats that are very similar to the CD audio format, since they support the same sampling rate and bit depth. These are the WAVE (.WAV) and AIFF (.AIF) formats.

WAVE and AIFF are two audio file  formats that support 44.1 KHz, 16-bit, stereo audio, which is the standard audio specification used by audio CDs. They are also encoded with pulse code modulation (PCM), which is the same encoding used by CD audio tracks. Therefore, WAV and AIF files can be easily converted to audio tracks when burned to a CD.

The WAVE and AIFF formats are very similar, but they use different file headers. Since the headers are stripped away when the audio data is converted to CD audio files, both file types are a good choice for creating audio CDs. 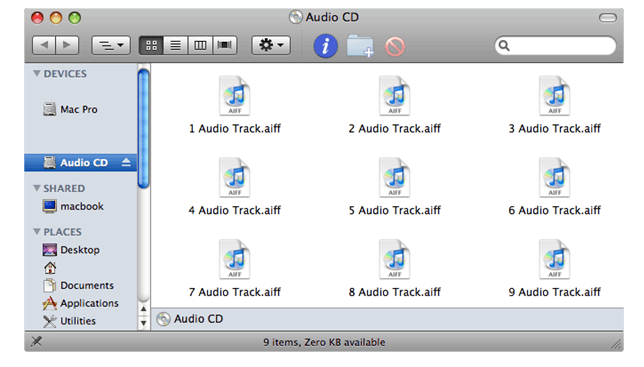 In Windows, audio CD tracks show up as .CDA files. These are shortcuts to tracks on the CD, which do not contain audio data. Instead CDA files instruct the computer which audio track to play on a CD. Therefore, if you drag a CDA file to your desktop, it will only produce a shortcut. To import audio from a CD, you will need to use a program like Windows Media Player or iTunes. When the same CD as above is inserted into a Windows computer, the following window appears.

Most audio programs, including iTunes and Windows Media Player, can burn other audio file types besides WAVE and AIFF files to CDs. However, the quality may not be as good, since the compressed format must be converted to an uncompressed format. While the sound quality should not be any worse than the original compressed sound, it will not improve when converted to CD quality audio.

Therefore, if you want the highest possible fidelity on your audio CD, it is best to burn WAVE or AIFF files. However, it may not make much of a difference as long as you have high-quality compressed CD audio files. With today's advanced audio compression algorithms, most people cannot tell the difference between compressed and uncompressed audio files.

Hello, please leave your name and email here before chat online so that we won't miss your message and contact you smoothly.